8 Haunted Places You Should Visit in Madison 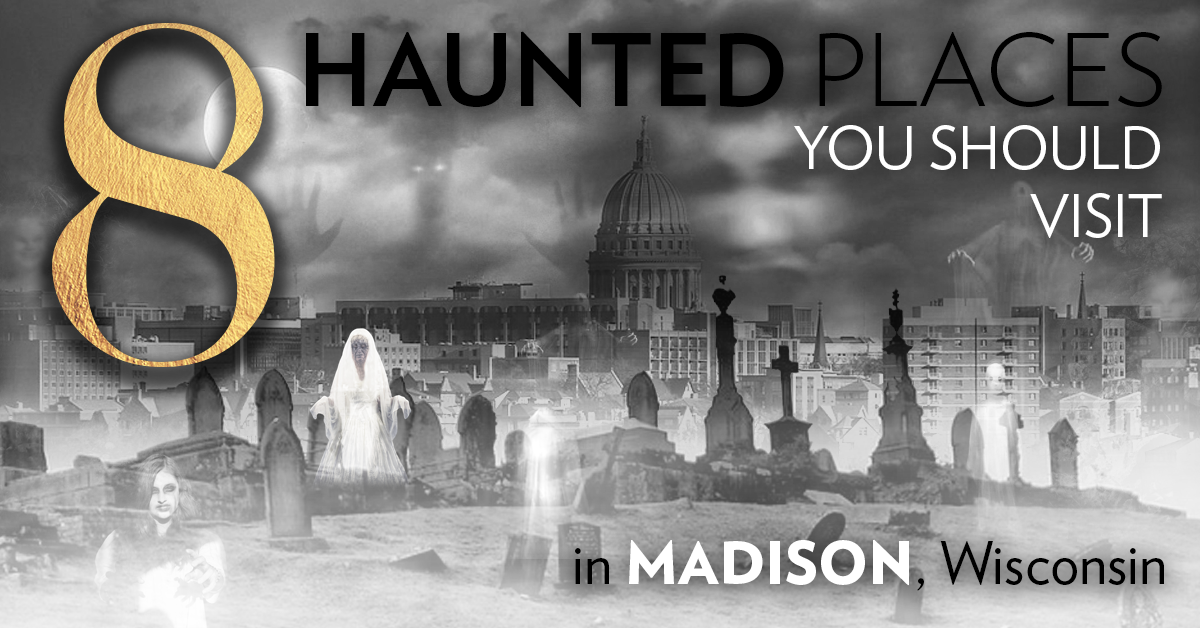 Home Of The Most Haunted Places In Wisconsin

Madison, Wisconsin has a lively, colorful, and eclectic culture. As the capital city of Wisconsin, Madison is central to much of the state’s rich and complicated history. It’s no wonder the city abounds with rumors of ghosts and hauntings.

In the spirit of Halloween, The Madison Concourse would like to set the mood with a few spooky stories. Check out our list of some of the most reputedly haunted places in the Madison area, and stop by these iconic destinations if you dare!

Madison’s Majestic Theatre marquee gleams brightly on King Street, just off of Capitol Square. This glamorous theater first opened its doors in 1906 to host vaudeville acts, but since then has been everything from a silent movie house to its current incarnation as a music venue. Captivating performers such as Harry Houdini have graced its stage.

Multiple witnesses over the years have reported a strange, misshapen shadow man roaming the vintage venue. One such story comes from a pair of college coeds who were taking a study break up in the balcony. One of them stood up to stretch her legs, and saw behind her what she described as a “putty man” made of shadow. She brings the nightmare manifestation to her friend’s attention, and as she does, the thing appears to grow larger and larger, causing the young students to scream and beat a hasty retreat.

Another paranormal event occurred shortly before the Majestic closed for a period in the year 2000. Cast members preparing to participate in the Rocky Horror Picture Show reported hearing a ghostly voice cry out “Good luck with the show!” and having their hair pulled by spectral hands.

Madison’s old tuberculosis sanatorium stands sentinel over the Northport neighborhood, looming between it and the decaying remains of the area’s tortured past. The Lake View Sanatorium housed tuberculosis patients from 1930 to 1966, and although it is impossible to know how many lives were taken by tuberculosis in Wisconsin, by 1930 it was estimated to be the 7th leading cause of death in the state, with 1,514 residents succumbing to the disease that year. In the modern era, the city has converted the sanatorium itself into a home for the Dane County Human Services Department, but all of the remaining structures—and the remains of others that have fallen into disrepair—reside in what is now Lake View Hill Park and wilderness preserve.

While the main building is imposing in its vintage horror visage, it is the woods behind it and the small graveyard to the west of the old sanatorium that have the strongest reputation for paranormal activity. Reports of cold and hot spots, apparitions, strange lights, odd mists, and physical manifestations—such as being touched by phantom hands—are common on the trails woven throughout the tree-enshrouded Lake View Park, and in the nearby graveyard.

Paranormal belief aside, the grounds are a lovely example of Madison’s dedication to natural spaces, and perfect for a pleasant Autumn stroll. If you’re feeling nervous about traversing the reputedly haunted woods, then bring along your faithful canine companion--dogs are allowed in the park, but must remain on-leash.

Madison’s Orpheum Theater has proudly preserved its identity into the 21st century. Standing less than a block away from The Madison Concourse Hotel, the building’s limestone, art deco exterior and French renaissance interior harken back to its inception in 1926; the theater’s flashy grand staircase and gaudy chandeliers remain as a testament to the era of vaudeville that birthed it. The Orpheum takes its name from the Greek hero Orpheus, and his statue still overlooks the theater’s entryway. Orpheus, of course, was a champion of music and poetry, a trait he shares with his namesake theater. But few can forget the tragedy of Orpheus, and the tale of his lost love Eurydice, for whom he traveled all the way to the Underworld. The Orpheum was named very appropriately, then, because like the tragic hero from which it takes its name, it too has a connection to the underworld—the Orpheum theater is said to be haunted.

Otherwise rational visitors to the Orpheum have reported an uneasy feeling in the theater’s furnace room and downstairs restroom area, and strange noises heard throughout the building include muffled conversations, footsteps in the hall, and jingling keys. It should go without saying that the source of these spectral sounds is a mystery to those present, since they happen only when nobody else could reasonably be expected to be there. People also report apparitions in period clothing from the 1920s and 1930s who vanish soon after being seen.

When you visit, make sure to stop by and see the theater’s very own photograph of a ghost. In the hallway to your left as you enter, there is a photo of the theater from 1927, and in that photo there exists the ghostly image of a man who was said to have not been present when the picture was taken.

Madison’s Wonder Bar Steak House exists within a squat, imposing brick fortress that once stood in defense of the Prohibition-era mobsters who commissioned its creation. Built in 1929, the building has two matching turrets standing watchfully above its entrance on either side, through which a gangster could angle the barrel of his Thompson submachine gun in case of an unexpected raid. The bar was run by Eddie Touhy, brother to Chicago’s infamous Roger “The Terrible” Touhy—famous for distributing alcohol illegally, and his rivalry with fellow Chicago mafioso Al Capone. A tunnel once led from the Wonder Bar to nearby Lake Monona to aid in the Touhy brothers’ bootlegging activities, although it’s since been filled in.

Now an upscale Steak House, the Wonder Bar had some seedy beginnings as a bar and hangout for Chicago mobsters. The bar was first built in 1929 and was run by Eddie Touhy, who was a brother to Chicago’s Roger “The Terrible” Touhy, a rival of legendary Al Capone.

Reported paranormal phenomena include a men’s room door that slams seemingly of its own accord, and a helpful ghost who once returned a small sum of money to a waitress after it went missing from her till. But it isn’t only the Wonder Bar’s staff who witness strange things--a firefighter performing a building inspection after hours reported hearing phantom footsteps and voices while examining the basement.

None of that should damper your visit to this historic hangout, and while you may come for the ghosts, you’ll stay for the spirits (served in their craft cocktails).

One of Madison’s favorite brewpubs is located in a 140-year-old building that was once known as the Fess Hotel. The space has been occupied by The Great Dane Pub & Brewing Co. since 1994, but it seems they may not be the only occupants…

The Great Dane has long been considered haunted by its employees. Over the years, the stories have continued among them as they come and go, and it seems to be something of a living tradition. There is a room in the basement used for storage known as the “spooky room.” It’s rumored to be constantly cold, and evokes a feeling of dread so intense that few can stand to be in its presence. The bar receives phantom phone calls as well, and in true horror movie fashion they always appear to be coming from the in-house line. It’s even experienced poltergeist phenomenon, as one employee witnessed a set of pool cues being knocked from their rack, one by one.

Don’t let this scare you off, though, because the Great Dane is still a great place to grab a beer—just don’t do it in the spooky room.

A relatively new addition to the Capitol Square bar and restaurant scene, the Boar and Barrel was established within the building which previously housed The Blue Marlin and Hamilton’s on the Square, and the space was historically a German butcher shop owned by one of Madison’s first mayors.

During a remodel of the building in the 1980s, the sign painter went into a trance and told one of the owners that someone would die before the restaurant would open. The ominous premonition came terribly true when a construction worker died of a heart attack before the restaurant opened its doors to the public. A cleaner working in the building has also reported seeing an unidentified apparition on the floor upstairs from the Boar and Barrel.

Don’t let this give you second thoughts about going, because the only future event you need be concerned about is which delicious drink you’ll try.

The building housing the seafood restaurant was once a funeral home owned by the Frautschi family--the same civic-minded clan who brought us the Overture Center and Concerts on the Square. The Frautschis owned the funeral home from when it was built in 1929 until the late ‘70’s when the business was closed.

Employees of Tempest have reported dishes and fire extinguishers moving on their own, and residents of the upstairs apartments have complained of paranormal activity; although no discernible origin for the phenomena exists.

Regardless of whether or not its previous incarnation as a funeral home has led to the building being haunted, the Tempest has a wonderful menu and happy hour that is definitely worth the risk.

Iconic Bascom Hill is the heart of UW Madison’s campus; surrounded by historic buildings and topped with a picturesque statue of Abraham Lincoln gazing serenely out over the city. But before it served the university’s students and faculty, it fulfilled a different purpose--that of the city’s first cemetery.

Bascom Hill was the site of a cemetery for white settlers from 1837 until 1846, when the dead were disinterred and moved to another location to make room for the University of Wisconsin...or were they? In 1922 the remains of Samuel Warren and William Nelson were found buried in the hill while excavators were working to install the statue of President Lincoln, and to this day their final resting places are marked with brass grave marker bearing the men’s initials.

Passersby have reported ghostly figures of an older and younger man walking near the statue, and there are also stories of an apparition--described as being “from a different time,” complete with a bowler hat-- walking up and down the stairs of Bascom Hall.

These were just a small sampling of Madison’s many historic and haunted landmarks that have survived into the present day. The city has many other stories to tell and adventures to share, and if you do choose to visit any of the sites listed we can assure you any ghosts present are perfectly harmless. Madison’s undead residents are as warm and welcoming as its living ones. So please share in our unique history the next time you’re in town and add a few more interesting stories to your Madison experience.

Visiting all the haunted spots in Madison? Stay with us at The Madison Concourse Hotel. There are no ghosts here... that we know of...